Tourists spend more in Dubai than any other city in the world.

Dubai recorded the highest international overnight visitor spend in 2017 with tourists shelling out $29.7 billion (Dh109bn), a ranking of global cities by Mastercard found.The emirate attracted the most consumption by tourists for the third year in a row, with a $537 daily spend, according to Mastercard's Global Destination Cities Index 2018, which assessed 162 cities.

Dubai was also ranked the fourth most-visited city in the world for the fourth year. Abu Dhabi is the fastest growing city in the Middle East and Africa, with a compound annual growth rate of 18.21 per cent between 2009 and 2017 in overnight visitor arrivals. The capital is also among the top 10 cities experiencing the strongest growth in international arrivals.

New attractions and experiences have contributed to Dubai's success, said Issam Kazim, the chief executive of Dubai Corporation for Tourism and Commerce Marketing. He cited the city's "culture and the arts to history and heritage as well as updates to attractions" as main contributors to the rise.

Dubai, the commercial and tourism hub of the Arabian Gulf, received 8.1 million tourists in the first half of this year, a nearly flat year-on-year growth, according to the DCTCM. But the number of visitors from China and Russia rose sharply due to to a relaxation in visa requirements for the nationals from the two countries. The UAE, the second biggest GCC economy, is implementing a number of measures to boost tourism, including plans to grant visit visa to transit passengers.

Abu Dhabi has also seen its investment into promoting the emirate as a must-visit tourist destination pay off. The number of hotel guests staying in the capital rose by 10.5 per cent in

In Mastercard's index, Bangkok was the most visited city in the world with 20.05m visitors last year and an average daily spend of $173. London took second position with 19.83m visitors and Paris came in third with 17.44m visitors.

While Dubai took fourth place as it hosted 15.79m overnight tourists in 2017, with an average stay of three-and-half nights, visitors spent significantly more on a daily basis. 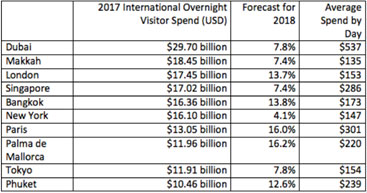 Paris had the second highest daily spend at $301 a day, followed by Singapore at $286. The daily spend amount includes the cost of staying in a hotel.

Saudi Arabia's Mecca had the second highest international spend in 2017 at $18.45bn. This is likely due to the high number of religious visitors the city receives annually. London came in at third position with an annual international spend of $17.45bn. Of the most visited cities, Istanbul had the lowest spend per day at just $108 on average.